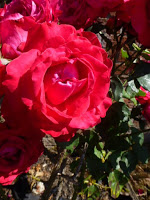 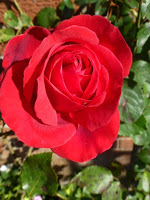 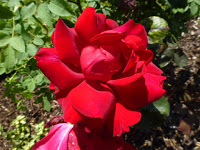 Everlasting rose bushes
In the early 70s an old neighbour gave me ten rose bushes, telling me that
they were his fathers and were 75 years old.
The photos above are the three remaining roses.  When we moved to this house we took them with
us and for the past decade I have neglected them.  Apart from pruning them and a little feeding
in the spring.  Yet, having seen around
one-hundred-twenty summers they still give a wonderfully colourful
display.  Jock’s father would never have
thought for a second that all these years later his roses would still be
blooming and giving pleasure to all who walk past them.
Half of one of the bushes has went back to its wild state and  has a
display of wild and cultivated flowers.
A lesson for us all.  Who knows how
far our words and deeds will carry on. So, let’s make sure they are beneficial
and not a hindrance to others.
**************

“Four seeds in a row, one for the rook and one
for the crow, one to wither and one to grow!
I learnt this rhyme as a child so please
remember it when taking blackberries, fungi or whatever from the wild places.
Leave some for other species. I live close to the forest, and within just a few
years, pickers have stripped the forest bare!
If we all adhered to this old saying and
Wendy’s comment, Planet Earth would not be in the state it is in today. We
would be helping mother-nature right the wrongs that are destroying our
planet”.

When I was young an old neighbour lived for his
garden and soft fruits were his speciality. He covered them with a net until they were ripe enough to
eat.  When he picked the fruit, he
divided his pickings between two pails and left some on the plants.  The contents of one pail were for the family
and the other for the children in the street.
He said that was for the kids not stealing his prized fruit.  The fruit left on the bushes were for the
birds and insects to build them up for the winter.
Keeping the cycle of
nature going means a better planet and a better life for all species who
inhabit planet earth.  And every single
one of us can play part in that cycle.
Planting wild flowers to attract the insects.  One lady I know who cannot get out of the
house came up trumps with her plan to keep the cycle of life going.  She phoned a garden centre asking them to
send her two outdoor potted plants that would attract insects.  They are sitting on her window sill and she
is amazed at the number of insects that are drawn to the plants.  Where there is a will – there is a way.
Not just helping Mother
Nature, but continuing in the same train of thought in our everyday lives to enhance
our spiritual growth and in turn help others.
*******
Sunday Afternoon
Services
The Largs/Ayrshire church is the
only spiritualist church that I know that has a service on a Sunday
afternoon.  There are many especially our
older members who do not like travelling in the dark winter’s night.  So, could this be the answer to our dwindling
attendances?
*******
Your emails on “Freewill Offering or Pay at the Door”.
Anon “I had to close the door
of my church for the last time because of poor attendances.   Switching from a collection plate to paying
£2 at the door made matters even worse.
If I had dropped the address I am sure we would have survived.

KL – The reason for poor attendances I put down to
too many psychic nights in the area”.
Morgan – “My job takes me all
over the country and I try to get to two spiritualist churches a week.  I am not there to get a message, but to see
how different mediums work with spirit.
My experience shows that paying at the door has almost caught up with
the collection plate”.
VE – “To keep our church in
the black would have meant charging £4 to £5 at the door.  That is too much
to ask anyone to pay for a service”.

Jessie “We found pay
as you enter the solution to all our problems.
The congregation and the committee are happy with the present set up”.

Moving Forward.
Often
throughout this blog, I have read articles which showcase the contemporary
issues that beset modern day Spiritualism; churches becoming sanctuaries, the
‘celebrity’ culture among some mediums, the lack of appropriate dress
code/platform ethics, the lack of philosophy – the list goes on.
In
the early days it was thought the unification of the myriad spiritual bodies
into a single body – powerful enough to lobby and facilitate change, would be a
force for good. The purpose was laudable but, divisions began to surface within
some of the larger bodies, which led to the growth of many ‘independent’
organisations. Doubtless, where bodies of people are involved boundaries can
become muddied and divisions arise – resulting in the wider movement becoming
fractured. At worst outright hostility can fester. Despite our differences,
there is a common goal. What can we do on an individual level?
For
many of the reasons mentioned earlier, I prefer not to badge myself as a
Spiritualist but, rather, as a spiritual being. There is much to celebrate in
the communion with Spirit, but first, on an individual basis we have to return
to basics to see the figurative wood from the trees.
For
those blessed to work as mediums, the hard work never stops. Constant review,
study & dedication are required to become a polished instrument for the
other world to play a fine tune on.
From
my own journey, I feel my soul re-awakened and a fire stoked in my belly.
Although I have learned much and moved towards a much better
understanding/appreciation of the world around me – I am mindful that I still
have a long road yet to travel, one no-doubt with twists and turns. We are all
on the same boat in this respect.
As
well as healing, comforting the bereaved and giving evidence of survival –
spirit communication is a Divine blessing which allows us to unlock our true
potential and invites us to look within and should never be taken for granted.
As
we awaken and open our minds, let us do so in love; for ourselves and our
fellow creatures.
Moving
forward into the 21st Century, may we play our own small part of
driving the truth of life eternal forward, devoid of any personal gain or party
politics. Let us free ourselves of any chains that bind.  As Robert Burns once said ‘Mony a mickle maks
a muckle’. Let us be agents of change – we owe that much to the pioneers of the
past and those still to come!
Bob MacKintosh.