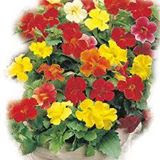 Earlier in the year I mentioned how a few of us were going to use our
talents, gifts, interests to help others less fortunate than ourselves.  Without being boastful we have all succeed in
giving some meaning to the lives of those we have helped.  My contributions have been to frame my paintings/photographs and passing them on to
charities and individuals.   My latest
venture has putting bedding plants in small troughs/baskets and giving them to
those who have been going through rough times at the moment. The latter has
been a far greater success than I expected.
With our long dry spell
those receiving the plants did not only look out on the colour and beauty of
the flowers, but had to get involved with watering them. This has encouraged
some to take a greater interest in planting a few of their own.  I decided to take this venture a stage
further by planting bulbs and primroses in the troughs to have flowers in bloom
all through winter and spring.
This plan
was knocked for six as the summer flowering plants are still in full bloom.  I don’t like to discard a plant that is still
flowering.  Also, I would be doing more
harm than good if I pulled out the summer plants at the moment. Those who
received them would be up in arms. So much has it changed their lives.  As one lady said “These little flowers are my
friends – my only friends”.  And as the
little girl said which got me thinking about the power of flowers “Flowers are
God’s little angels sent down to cheer us up”. 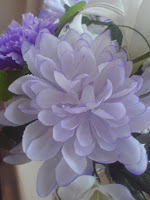 Over the years I
have constantly said in my address that I am surprised there was not eight
principles.  The eighth one being ‘Common
Sense’.  Act upon ‘Common Sense’ as well
as our other seven principles and we would be further along our spiritual path.
Spiritualism would be stronger and our communities/world would be in a better
place than they are in at the moment.

I saw this on
Facebook and I felt I had to add it to this page
An Obituary
printed in the London Times….
Today we
mourn the passing of a beloved old friend, Common Sense, who has
been with us for many years. No one knows for sure
how old he was, since
his birth records were long ago lost in
bureaucratic red tape. He will be
remembered as having cultivated such valuable
lessons as:Knowing when to come in out of the rain;

– Why the early bird gets the worm;
– Life isn’t always fair;
– and maybe it was my fault.

Common Sense
lived by simple, sound financial policies (don’t spend more
than you can earn) and reliable strategies (adults, not children, are in
charge).
His health
began to deteriorate rapidly when well-intentioned but
overbearing regulations were set in place. Reports of a 6-year-old boy
charged with sexual harassment for kissing a classmate; teens suspended
from school for using mouthwash after lunch; and a teacher fired for
reprimanding an unruly student, only worsened his condition.
Common Sense
lost ground when parents attacked teachers for doing the job
that they themselves had failed to do in disciplining their unruly children.
It declined
even further when schools were required to get parental consent
to administer sun lotion or an aspirin to a student; but could not inform
parents when a student became pregnant and wanted to have an abortion.
Common Sense
lost the will to live as the churches became businesses; and
criminals received better treatment than their victims.
Common Sense
took a beating when you couldn’t defend yourself from a
burglar in your own home and the burglar could sue you for assault.
Common Sense
finally gave up the will to live, after a woman failed to
realize that a steaming cup of coffee was hot. She spilled a little in her
lap, and was promptly awarded a huge settlement.
Common Sense
was preceded in death, by his parents, Truth and Trust, by his
wife, Discretion, by his daughter, Responsibility, and by his son, Reason.
He is
survived by his 4 stepbrothers;
I Know My Rights
I Want It Now
Someone Else Is To Blame
I’m A Victim 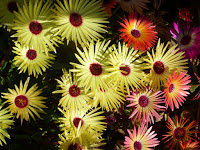 With More than a Little Help from Spirit

One thing that I found difficult and
still do to this day, is saying prayers.
I worried more about the prayers than the address or clairvoyance.
Then spirit came to my assistance.  As I was sitting at my computer listening to
some hits of the 60s.  I suddenly looked
at my monitor and I had typed with assistance of Spirit an opening prayer.   In front of me was; –

“Divine and loving parent we gather here in your name, which is
love.

We gather here, some knowing, some hoping that when we leave
this physical body a new dawn will await us.

At this time, we send our thoughts out to those who are
suffering, whether it be mind, body or spirit.

That someone takes time for those that are lonely.  Even though it is only the briefest smile.

All those suffering from addiction – are given the strength and
courage to overcome their difficulties.

We can never end our prayers without a mention of the animal
kingdom.  May they receive the food,
shelter and apace that they need.

All this we ask in your name which is love”.
I was shocked when I read what I had
typed and suggested to spirit that they assist me with a closing prayer.  At that my fingers started to move over the
keyboard and the following took shape.

“Divine parent we thank you.
We thank you for your presence here this evening.  And also our spirit friends for proving there
is no end. And when it is our turn to mover over to the other side of life –
they will be there to greet us.
May we ask that every head bowed here has a safe journey home”.

After all these years, I still use these words at the beginning
and end of our services.

SNU to take part in the National Remembrance
Sunday event at the Cenotaph.
At long last A very proud day for Spiritualism, we have asked so many times to be
included only to be turned down, now the door is open and we will proudly stand
shoulder to shoulder with other faith leaders in respect of those who gave so
much in the name of freedom. Spirit in action.
“Spirit in action”?
When the SNU became part of the Interfaith movement I was
sure it was only a matter of time until our wish was granted.  However, should we not have
been doing more than “just ‘asking’?  For several years I have felt the SNU should
have been more active in trying achieving this.  Encouraging all its members to constantly
bombard Government and Members of Parliament with letters and emails. Many
small spiritualist churches have overcome prejudice and hostility to lay a
wreath at their local cenotaph by involving the community to help them achieve
their aim.
In October 2008, Steven Upton of The Spiritualists’ National Union
started an online petition, on the Number 10 web site, to allow a
representative of the Spiritualists’ National Union to place a wreath at the
Cenotaph.  I believe 1,900 signed the
petition.  Why did the SNU follow up this by asking its members to
regularly contact their elected representatives on this matter. Asking year
after year and meekly accepting a “NO” lacks ambition to succeed. 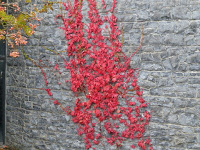 Controversial,
what is E.G.O.!

Controversial, what is E.G.O.! Everyone has it to some
degree: but it should be kept in check. Especially when working for the sprit!
My personal view is working for spirit is not about self: because we are the
mere voice of greater intelligence. ”We” as an individual should not be
important, ”as I state always” It does not matter who the medium is, or their
name, as long as the message from spirit is fully understood and appreciated by
the recipient of any given message.
The medium is secondary to the greater
truth. Again, this is only my opinion, but it is my opening gambit every time I
work, call my what you wish, as long as I connect for you, and you receive the
relevant proof and information you require. I leave the rest to more powerful
benevolent spirit’s who have a greater, more refined clearer overhaul knowledge
than I will ever understand.
My theory is ego is a need to feel important, and
to feel the need to impress. Spirit always impresses without the need to try,
they have nothing to prove, as the proof is awaiting us all after this physical
journey ends. E.G.O. To Elbow God Out. I would not dare try, would you?
Ray Kane Foulkes